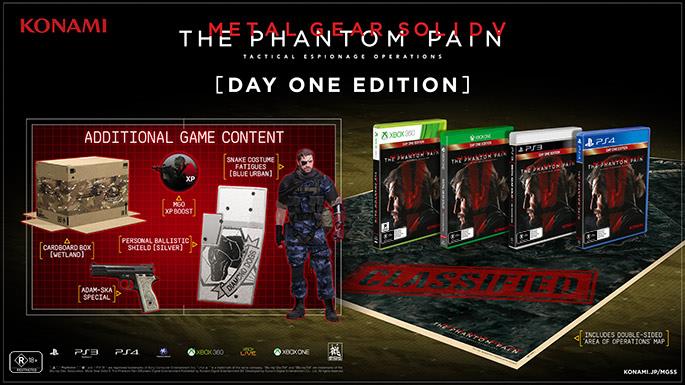 Metal Gear Solid V: The Phantom Pain is one of the most anticipated games of the year. Konami’s open world stealth game created and directed by Hideo Kojima, continues the story from MGS V: Ground Zeroes, released in 2014.

This instalment completes the unified Metal Gear saga which begun in the original Metal Gear for MSX, continued through Metal Gear 2, the Metal Gear Solid core series and Peacewalker.

Ushering in a new era for the franchise with cutting-edge technology powered by the Fox Engine, MGSV: The Phantom Pain, will provide players a first-rate gaming experience as they are offered tactical freedom to carry out open-world missions.  Taking place nine years after the events of MGSV: Ground Zeroes and the fall of Mother Base, Snake a.k.a. Big Boss, awakes from a nine year coma.  The game resumes the story in 1984, with the Cold War still as the backdrop, which continues to shape a global crisis. Snake’s journey takes him into a world where he is driven by a need for revenge and the pursuit of a shadow group, XOF.

The Setting
MGS: The Phantom Pain presents an open world environment, over 200 times larger than Metal Gear Solid: Ground Zeroes. Set in the vast regions of Afghanistan and parts of Africa, cracked walls are climbable, weather changes as time passes and changes in conditions directly affect game play, enemy positions change based on time and an item called the Phantom Cigar allows players to quickly cycle through day and night.

The FOX Engine
A new engine developed by Konami, the Fox Engine was custom designed to facilitate a large, sectional and team-based approach to achieve new heights for a detailed open world, and a true unique gaming experience including online gameplay. Initially, utilised in MGSV: Ground Zeroes.

Combat & The Buddy System
Close Quarters Combat skills allow characters to better defend attack from behind. Non-lethal takedowns are rewarded – subduing an enemy in a non-lethal way will allow you to transport them back to your Mother Base. From here, the captured foe will be trained to join your army, which will likely play a role at a point later in the game.

Snake may use his artificial left arm to deliver an electric shock, stunning nearby enemies, furthering his classical stealth takedown abilities. Holographic distractions will allow Snake to draw enemy attention away from himself.

The famous Cardboard Box is back, but now, you can use it as a decoy, jump out of it to quickly take out a target, or dive for cover directly from it should you be spotted.

Players may bring optional buddies into missions using the Buddy System, providing them with allies in difficult situations. So far, Quiet and DD are confirmed as available buddies.

Mother Base & The Fulton System
It is not its first appearance, but due to its destruction in the last game, it's up to Snake to rebuild it Mother Base into a customisable base of operations for Snake and his allies. From here, players will be able to use accumulated resources to craft and customise weapons and vehicles. Its appearance will alter according to the individual.

Players can secure new resources immediately through capture, and also tag vehicles and equipment to be airlifted back to base for later.

The Fulton system is a rapid balloon airlift first implemented during the Vietnam War and features prominently as a means of transporting people and objects to Mother Base. It allows players to rapidly move vehicles, weapons, containers, prisoners and animals across the map.

Players can use a range of tactics and weapons to undermine the other team, including standard machine fire, tranquilizers, grenades, fulton balloon traps, robotic machines as well as defend with shields, hide with cardboard boxes, distract with stuffed puppies and tag enemies with binoculars. Choke holds, slams, and interrogations are available in close quarter combat and players can also free teammates from some traps.

Both Snake and Revolver Ocelot are playable in MGO.

After a certain point in the game, players will gain the ability to interact, assist or sabotage other players’ Mother Bases through online connectivity. Players will be given the option to interact with rival Mother Bases in cooperative or competitive fashion.

The Chicken Hat
Players looking to goof around or get ahead can opt to equip with the Chicken Hat, an item which decreases the difficulty of the game. As its name implies, the Chicken Hat alters Snake's appearance to resemble a giant gun-toting poultry.