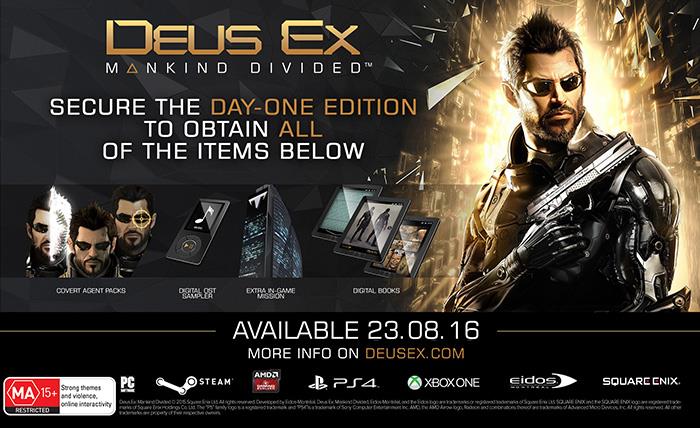 • Enforcer pack: Just want to power your way through your opponents? The enforcer pack contains custom skinned versions of Adam’s Combat Armor and Combat Rifle (including a holosight, reload, and capacity upgrade) from Deus Ex: Mankind Divided, 2 HE Grenades, and 5 packs of 5.56mm Combat Rifle ammo. This pack will help to get you out of a tight spot, leaving only bullet holes in the wake of your onslaught.

• Intruder pack: If you prefer to take the silent route, the Intruder pack provides you with custom skinned versions of Adam’s trench coat and Pistol (including a silencer, laser, recoil, and accuracy upgrade) from Deus Ex: Mankind Divided, 2 EMP Grenades, and 5 packs of 10mm Pistol ammo. Become a ghost in the wind, sneaking past any obstacle without so much as a glance in your direction.

• Classic pack: Go back to your roots with the Classic pack, granting you in-game access to Adam’s iconic Combat Armor, Trench Coat, and Revolver from Deus Ex: Human Revolution. In addition, you will receive 1 pack of ammo for your Revolver. No matter the path you choose, you’ll be sure to turn a few heads with your unparalleled style.

Extra In-Game Mission: As Adam Jensen, you find yourself in the city of Prague, recently rattled to its very core due to a bombing at the Ruzicka train station. With tampered security footage hampering the investigation behind the attack, you must rely on both your augmentations, and skills as a covert operative, in order to unveil the true culprit responsible for the bombing.

Digital Comic Book: Further explore the Universe of Deus Ex through this digital comic book, branching deeper into the global conspiracies that are consuming the entire world.

Novella: Follow the stories of iconic characters from Human Revolution, unveiling new and previously unknown details about their lives.

Deus Ex: Mankind Divided directly follows the aftermath of the Aug Incident, a day when mechanically augmented citizens all over the world were stripped of control over their minds and bodies, resulting in the deaths of millions of innocents. The year is now 2029, and the golden era of augmentations is over. Mechanically augmented humans have been deemed outcasts and segregated from the rest of society. Crime and acts of terror serve as a thin veil to cover up an overarching conspiracy aimed at controlling the future of mankind…

Deus Ex: Mankind Divided™, the sequel to the critically acclaimed Deus Ex: Human Revolution®, builds on the franchises trademark choice and consequence, action-RPG based gameplay, to create both a memorable and highly immersive experience. Players will once again take on the role of Adam Jensen, now an experienced covert agent, and will gain access to his new arsenal of customizable state-of-the-art weapons and augmentations. With time working against him, Adam must choose the right approach, along with who to trust, in order to unravel a vast worldwide conspiracy.

Human 2.0 - Become the ultimate augmented covert agent. Choose from a vast array of cutting edge weapons and augmentations, customizing them exactly to your desired specifications. Unlock new abilities, increase your stealth, social, hacking or combat skills, and determine how you want your character to evolve in order to fit your play style.

In the near future, mankind stands divided - Explore diverse locations and discover a near future setting where the fate of humanity hangs in the balance. The oppression of the mechanically augmented has created a climate of fear and resentment, resulting in an escalation of crime and acts of terror. Amid all the chaos, secret organizations are working behind the scenes, attempting to manipulate and control the fate of mankind.

Meaningful choices and consequences - Experience the renowned world of Deus Ex, where the decisions you make and the actions you take play a crucial role in determining the game’s outcome. Choose between combat, stealth, social, and hacking approaches to achieve your objectives. Be mindful though, as there will be a meaningful consequence to every action and choice you make.