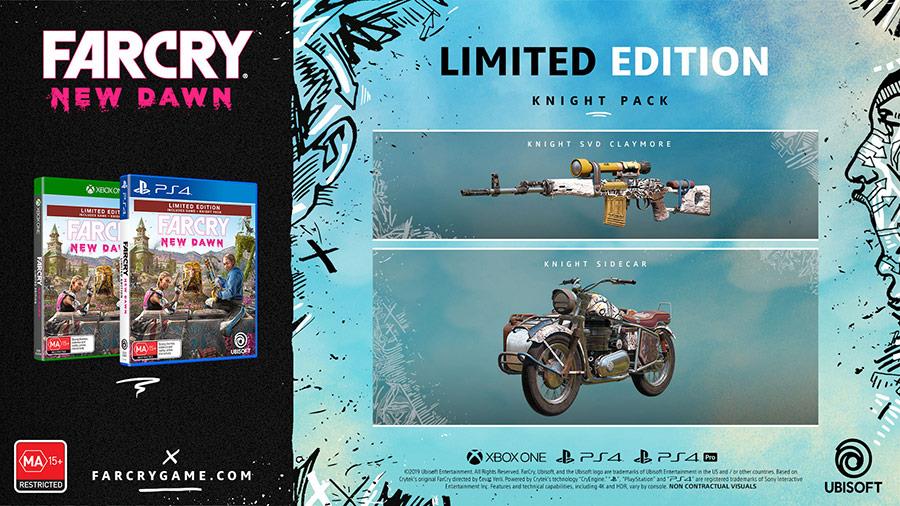 Start your journey in the apocalyptic world of FAR CRY® NEW DAWN with style thanks to the LIMITED EDITION including:

Seventeen years after a global nuclear catastrophe, civilization re-emerges from the chaos to find a world dramatically changed. In Hope County, Montana, the remaining populace has gathered into different groups, each with their own rules for survival.

In this new world order, the vicious Highwaymen, led by twin sisters Mickey and Lou, travel from place to place bleeding people dry of all available resources. As the Survivors try to defend their lands against the Highwaymen’s relentless onslaught, it’s up to you to come to their aid and lead the fight.

In the latest installment of the award-winning Far Cry franchise, you are the last line of defence in a transformed, post-apocalyptic Hope County. Help the community of Survivors grow stronger, craft a makeshift arsenal through Turf Wars and cross-country Expeditions, and form unexpected alliances to fight for survival in a dangerous new frontier.

FIGHT FOR SURVIVAL IN A BREATHTAKING POST-APOCALYPTIC WORLD

GROW THE SURVIVORS TO BUILD UP YOUR HOMEBASE

BATTLE FOR RESOURCES IN HOPE COUNTY AND BEYOND