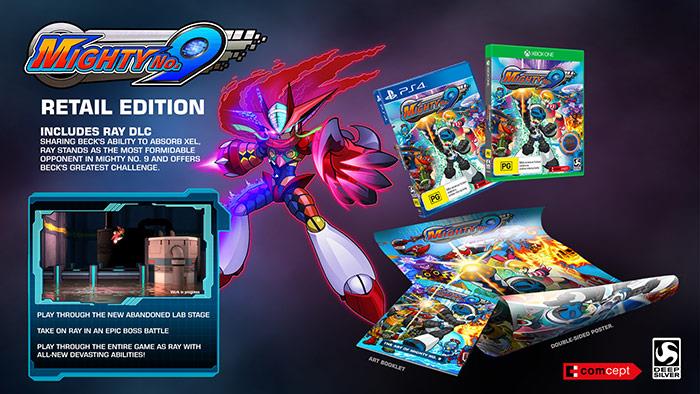 In the year 20XX ---- In a world where robotic engineering has greatly advanced.

Although robotic advancements helped to maintain public order and development, people began to feel suppression and social stress due to these peace keeping measurements. As an outlet, a government sponsored public robot battle competition known as the “Battle Colosseum” was created. Little did they know, a new threat to mankind was afoot.

Dr. White created 9 robot siblings known as the “Mighty Numbers”, who were the most popular and powerful team of robots in the Battle Colosseum and always in the top ranks. But, during one competition there was a sudden act of cyber terror, infecting them with a computer virus causing them to become crazed and rampant.

The crazed siblings took control of various key facilities and utilities. The virus continued to spread to all the robots of the world. It is now up to the lone Mighty No.9 “Beck”, who remains unaffected by the virus.  Beck, who had always been the weakest link on the team, was now entrusted with the future of all humanity!

Once, you worked together, side-by-side—but now, your fellow Mighty No. robots have lashed out, taking over key strategic locations across the globe and infesting them with their minions. You have no choice: the other Mighty Numbers...Must. Be. Destroyed!

But it won’t be easy. Although they were originally designed for industrial purposes, the Mighty Numbers have all become fierce warriors, seasoned through seasons in the most popular spectator sport of the future: robot-on-robot combat in the Battle Colosseum!

• Classic 2D Action: Transformed! Face off against your 8 Mighty brethren and unlock new transformations as you defeat them, granting you unique skills and abilities!

• Play through 12 Challenging Stages in a single player campaign that will put both your thumbs and action platforming skills to the test!

• New Game+ with unlockable two additional difficulty levels for those who want an even Mightier challenge.

• Boss Rush Mode: Play through each of the game‘s bosses, back to back, with a clock ticking to keep track of your best time, so you can share, compare, and show off your skills to your friends!

• Show the world your Mightiness in the 2 Player Online Race Battle where you compete online, racing through each stage together in a head to head battle - adding an all new twist on versus mode play that will give Mighty No. 9 life well beyond the single-player campaign!

• 2 Player Online Co-Op Challenge Mode: take on over a dozen missions online with a friend, playing as Beck and his partner, Call! Use Beck and Call’s different powers together in order to defeat these special challenges!

• Leaderboards & Rankings: Use Beck's Absorption Dash skill and his other abilities & transformations to chain together combos and perfect your run-throughs to earn those sweet high scores and S-Ranks!

• Mighty No.9 is a veritable who’s who of veteran game composers (Manami Matsumae, Takeshi Tateishi, Ippo Yamada), so we thought, why not tap into that retro vibe? Mighty No. 9 features an optional chiptune version of the entire game soundtrack which you can toggle on and off!