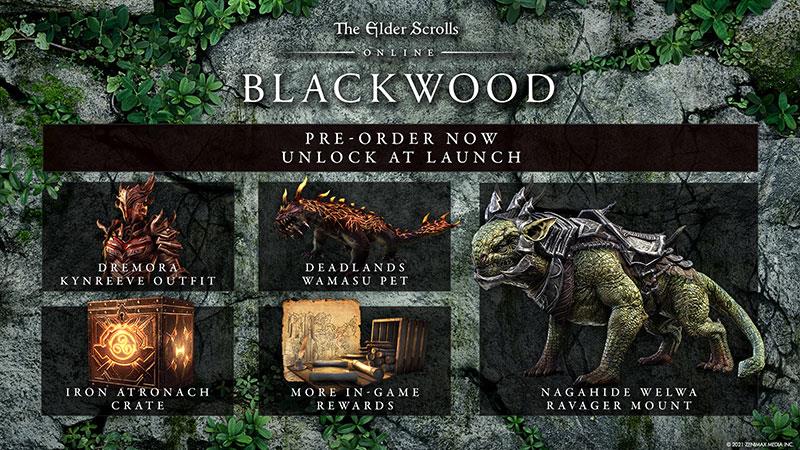 The Elder Scrolls Online: Blackwood is the next Chapter of ZeniMax Online Studios’ award-winning online RPG. Long before the Oblivion Crisis, the Longhouse Emperors made a deal with a devil - the Daedric Prince Mehrunes Dagon. That deal comes due in a saga of murderous deceit & sinister revelations that leads you to the nightmare realm known as the Deadlands, where players will fight to stop the Daedric Prince, Mehrunes Dagon himself. Players are not alone in their quest however, as returning characters Eveli Sharp-Arrow and Lyranth will support in their fight against the scheming Prince.

The Blackwood Chapter features a devilish main story containing over 30 hours of new content, tons of side quests, countless quality of life features, and, for the first time ever, introduces Companions who will adventure through Tamriel alongside the player. The new Rockgrove Trial, Oblivion Portal World Events, unique Chapter-specific rewards and more will provide The Elder Scrolls Online: Blackwood veteran players and newcomers alike with an amazing year of Daedric destruction.

A New Year-Long Adventure Awaits
The Gates of Oblivion is a year-long interconnected adventure spanning four updates in 2021: the prologue quest (free to all players) and Flames of Ambition DLC dungeon pack, the Blackwood Chapter, the Q3 DLC dungeon pack, and the Q4 Story DLC. Players can also enjoy free quality-of-life and performance updates alongside every quarterly update as part of our year-long commitment to improving performance.

Brand New Companions System
The Blackwood chapter introduces companions to The Elder Scrolls Online for the very first time. Once unlocked, players will be able to explore Tamriel with the added support a companion brings entirely at their leisure. Companions are adventuring buddies in Tamriel that can be levelled up, assigned abilities, assigned roles, equipped with items and even have their own rapport system. They have their own sets of likes and dislikes and players can unlock quests personal to their stories as they delve further into the system. With the destructive Daedric threat terrorizing Nirn, it never hurts to have a permanent friend by your side!

An Updated Tutorial
Set for release this year, the brand-new tutorial gives players flexibility to select exactly which story they want to start from in The Elder Scrolls Online’s almost-seven-year history. New players and veterans alike can make use of the updated feature for brand new characters entering the world of Tamriel, and with thousands of hours of content to choose from, players will be ready to take on the amazing adventures that they will find within!

A New Elder Scrolls Online Chapter for Everyone

The Elder Scrolls Online: Blackwood continues to build on ESO’s Chapter structure introduced in the ESO: Morrowind Chapter in 2017. Chapters deliver massive amounts of new content and features that are equally accessible and fun for both existing and new ESO players.

•New Players: New players can jump right into The Elder Scrolls Online: Blackwood and start a character in an updated tutorial and starter area, without needing to play previous ESO content. Since the original base game is included with The Elder Scrolls Online: Blackwood, new players also have access to hundreds of hours of additional adventures throughout Tamriel. New players get immediate access to the base game, Greymoor, Elsweyr, Summerset, and Morrowind Chapters, with any Blackwood full game purchase.

•Existing Players: ESO veterans will be able to upgrade and take their existing hero into Blackwood to begin new adventures. No matter their level, existing characters will find level-appropriate content from the moment they step into the new chapter.

Haven’t played ESO in a while? The Elder Scrolls Online: Blackwood is your best chance to jump back into ESO and continue adventures or start anew. Players only need to reinstall the game, log in, and start playing again.