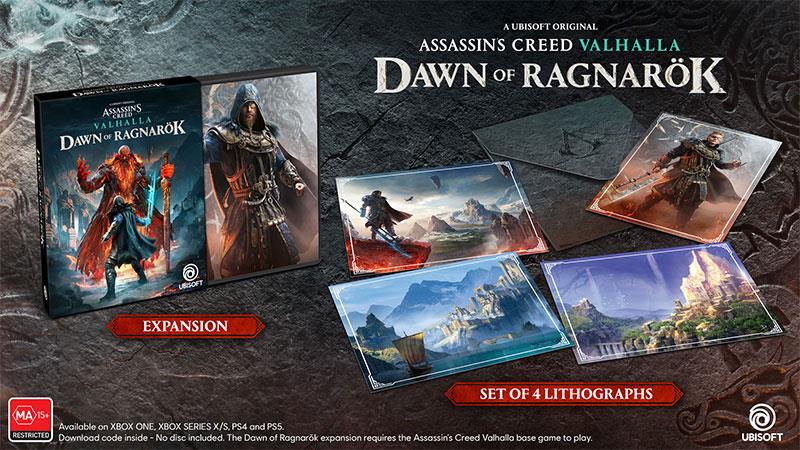 A download code for the expansion* Dawn of Ragnarök – No disc included
An envelope containing a set of four lithographs illustrating the art of Assassin’s Creed Valhalla: Dawn of Ragnarök 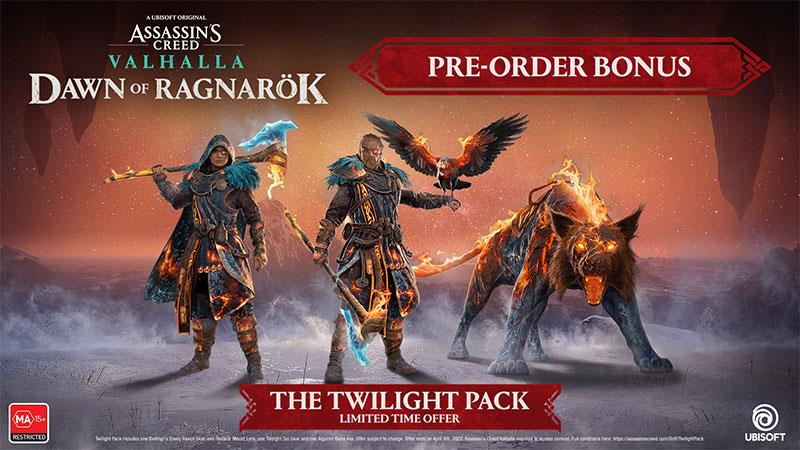 Get your pre-order bonus**: the Twilight Pack. It includes a Dellingr's Envoy Raven Skin, a Havardr Lynx Mount, a Twilight Gear Set and an Algurnir Dane Axe Weapon. 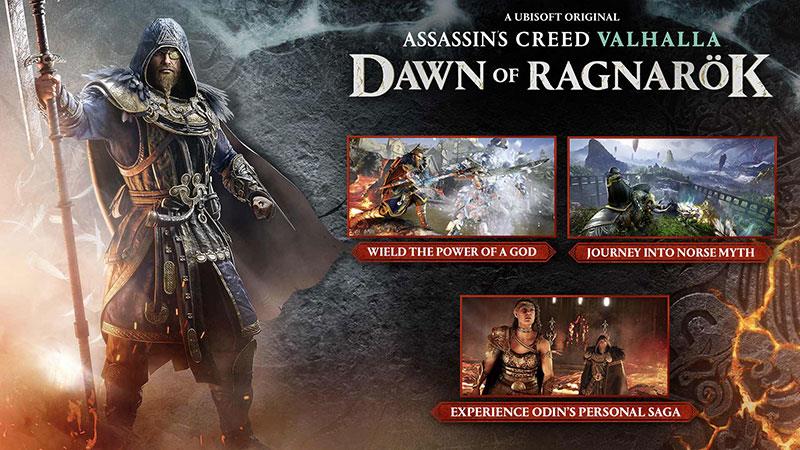 In Assassin’s Creed® Valhalla: Dawn of Ragnarök, the most ambitious expansion in the history of the franchise, Eivor must embrace their destiny as Odin, the Norse god of Battle and Wisdom. Unleash new divine powers as you embark on a desperate quest through a breathtaking world. Complete a legendary Viking saga and save your son in the face of the gods’ doom.

A war begins. A world ends. This is the Dawn of Ragnarök.

WIELD THE POWERS OF A GOD
Absorb new abilities from those you’ve defeated, shape-shift into a raven for spectacular assassinations, transform your skin into magma to protect yourself, and more.

JOURNEY INTO NORSE MYTH
Eivor must embrace their destiny as Odin and enter the mythical dwarven realm of Svartalfheim, a beautiful but hostile world under invasion.

FIGHT NEW ENEMIES OF ICE AND FIRE
Face off against Jotnars, foes of ice from Jotunheim, Muspels, new enemies of fire from Muspelheim and Surtr, an unkillable fire giant and the greatest enemy that Odin has ever faced.

EXPERIENCE ODIN’S PERSONAL SAGA
As Odin, embark on a desperate quest to rescue your son, Baldr, from imprisonment at the hands of an unspeakable foe. Your journey will force you to confront your own fate against the certain doom of Ragnarök.

BATTLE IN A NEW FIGHTING ARENA
Take on the Valkyries’ challenge and prove your combat prowess in the fighting arena. Increase the difficulty to gain better rewards as you battle new foes and familiar faces in a series of daring trials.

** Offer subject to change. Assassin’s Creed Valhalla required to access content. Game sold separately. Twilight Pack may be available for purchase and/or as giveaway separately at Ubisoft’s sole discretion at any time. Players who pre-order the physical version of the expansion will get access to the Twilight Pack from March 10th.