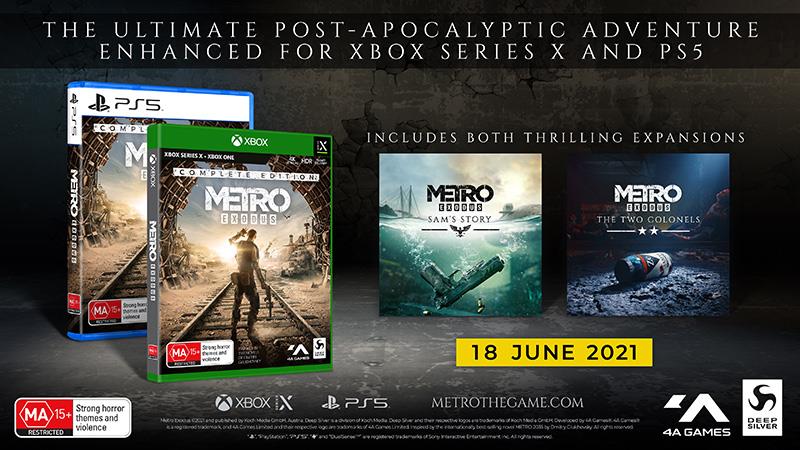 Metro Exodus is a story-driven, first person shooter from 4A Games that blends deadly combat and stealth with exploration and survival horror in one of the most immersive game worlds ever created. Flee the shattered ruins of dead Moscow and embark on an epic, continent-spanning journey across post-apocalyptic Russia in the greatest Metro adventure yet. Explore the Russian wilderness in vast, non-linear levels and follow a thrilling story-line inspired by the novels of Dmitry Glukhovsky that spans an entire year through spring, summer and autumn to the depths of nuclear winter.

Inspired by the novels of Dmitry Glukhovsky, Metro Exodus continues Artyom’s story in the greatest Metro adventure yet.

The Complete Package - includes Metro Exodus and all DLC content - The Two Colonels and Sam’s Story.

Deadly combat and stealth - scavenge and craft in the field to customize your arsenal of hand-made weaponry, and engage human and mutant foes in thrilling tactical combat.

Explore a hostile world - embark on journey that spans an entire year through spring, summer and autumn to the depths of nuclear winter. Discover the Russian wilderness, brought to life with day / night cycles and dynamic weather.