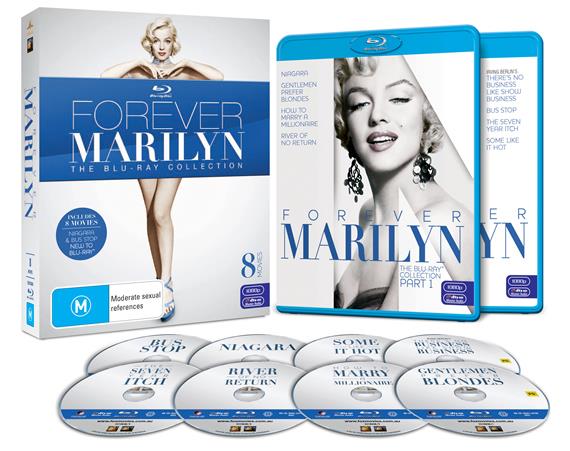 Marilyn Monroe stands alone as Hollywood's quintessential icon of sex appeal and timeless allure. Her breathy voice, voluptuous figure and wide-ranging talents catapulted her to superstardom, where she remains as legendary today as ever. Immortalized here in this must-own collection are eight of her best and most popular films, presented on Blu-ray - the perfect format to showcase Marilyn's flawless beauty and captivating performances as they're meant to be seen.

SOME LIKE IT HOT
When Chicago musicians Joe (Tony Curtis) and Jerry (Jack Lemmon) accidentally witness a gangland shooting, they quickly board a southbound train to Florida, disguised as Josephine and Daphne, the two newest — and homeliest — members of an all-girl jazz band. Their cover is perfect...until a lovelorn singer (Marilyn Monroe) falls for “Josephine,” an ancient playboy (Joe. E. Brown) falls for “Daphne,” and a mob boss (George Raft) refuses to fall for their hoax!

GENTLEMEN PREFER BLONDES
These glamorous showgirls have everything a girl could want - except engagement rings! In a quest for true love, Lorelei (Marilyn Monroe) and her gold digger pal Dorothy (Jane Russell) set sail on a luxury-liner bound for France. But the pair hits rocky waters when a manipulative detective, an over-aged, over sexed millionaire (Charles Coburn) and the entire men's Olympic team try to put an anchor in their marriage-minded mischief. It's a wild and joyously funny ride across the Atlantic as our bathing beauties plan and plot a way to land their men.

HOW TO MARRY A MILLIONAIRE
They're three beautiful models, looking for the man and the money of their dreams! Almost broke, they pool their funds to rent a posh Manhattan penthouse in which they plan to lure their victims. But the gold digger's plans suddenly go awry when two of them fall for men who appear to be poor! Trying to stop each other from marrying the wrong guy, Monroe, Grable, Bacall deliver the finest comedic performances of their careers. And they learn that a rich man is actually worthless- unless you're in love with him!

SEVEN YEAR ITCH
It's a steamy summer in New York City and this scandalous, sexy comedy heats things up even more! A married man (Tom Ewell), whose wife and son are away for the summer, has his fidelity put to the test when a seductive starlet (Marilyn Monroe) moves in upstairs. Keeping his marriage vows in the face of her flirtations proves tough when challenged by the notorious "seven year itch." Faced with this provocative problem, he's victim to an outrageous mating dance filled with hilarious comedy!

THERE'S NO BUSINESS LIKE SHOW BUSINESS
An all-star cast that includes Ethel Merman, Dan Dailey, Marilyn Monroe, Donald O'Connor, Johnnie Ray and Mitzi Gaynor sparks this tuneful Irving Berlin musical that depicts the trials and triumphs of a veteran vaudeville family. Molly (Merman) and Terry (Dailey) Donahue start out as a duo and keep adding kids to the act until they finally become The 5 Donahues. Their busy, sometimes tumultuous lives aren't always easy, but the Donahues have plenty of love to get them through the hard times and more than enough talent to keep them on top. Highlighted by one classic Irving Berlin song after another and an array of dazzling production numbers, this upbeat, utterly delightful tale of life on the stage proves, beyond and doubt, that There's No Business Like Show Business!

BUS STOP
A young and innocent cowboy discovers the girl of his dreams (Marilyn Monroe) and decides to make her his wife. She is more than reluctant to accept his proposal and he forces her to board a bus headed for Montana. The road is blocked and the journey is interrupted by an overnight stay at Grace's Diner, where her plight is soon revealed to all. Realizing his brute approach will never win her heart, he apologizes and kisses her goodbye, only to discover she really has grown to love him. Acclaimed by many as Marilyn Monroe's first serious acting performance. BUS STOP displays a mixture of humor and pain.

RIVER OF NO RETURN
Set against the majestic beauty of the great Northwest, Matt Calder (Robert Mitchum) is a rugged widower with a questionable past who decides it's time to start a new life with his young son, Mark (Tommy Rettig). But their peaceful existence is sabotaged when Matt is robbed and pistol-whipped by cold-blooded gambler Harry Weston (Rory Calhoun). Unexpectedly, Weston's fiancée, Kay (Marilyn Monroe) postpones her wedding so she can nurse Matt back to heath. In his pursuit to exact revenge at any cost, Matt takes Kay and Mark on a treacherous ride down a roaring river, where they're at the mercy of wild animals and a lawless frontier.